The Sixth Bi-Monthly Monetary Policy Statement for FY 2018-2019 was released by the Reserve Bank of India (RBI) today. Following were the highlights.

In Double Dovish policy action, Monetary Policy Committee (MPC) announced a 25bps repo cut (with 4:2 in favor of cut) along with a change in stance to “Neutral” (Unanimous decision). This is the first rate cut announced by the MPC since August 2017 and marks a reversal in the rate cycle. Over the course of 2018, the MPC had raised repo rates twice by a total of 50bps to 6.5 percent, in a shallow rate hike cycle that has now ended.

The rate cut decision was premised on the noteworthy reduction in MPC’s consumer price inflation (CPI) forecast (by 60-80bps for 1H FY20 to 3.2 – 3.4%) along with commentary that risks are more “balanced”, rather than tilted towards upside (as stated in the previous policy statement). This downward revision in CPI projections is primarily attributable to the remarkably soft food inflation data. The moderation in fuel prices was also more than previously anticipated. Given this backdrop, headline CPI is likely to be lower than the medium term target of 4% throughout 2019 as per MPC’s new forecast.

The growth forecast has been broadly retained, despite mentions about the recent softness in data. The need to support growth has also been flagged off. 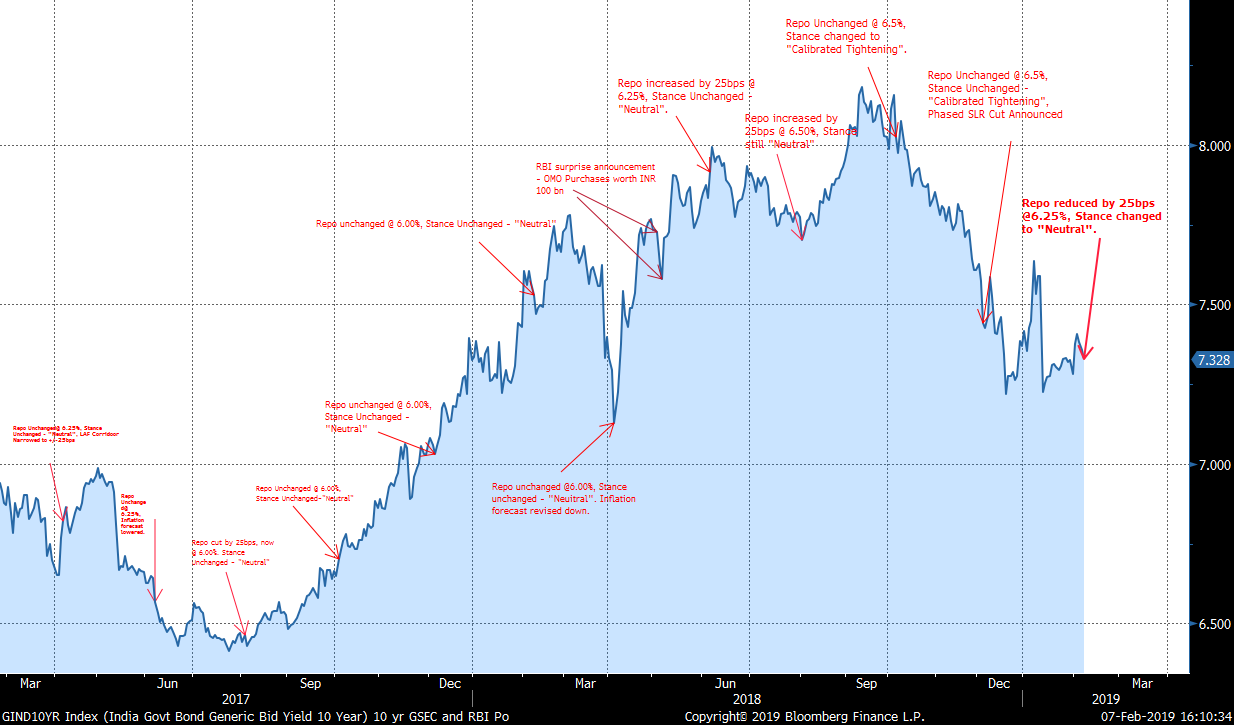 While core inflation (excluding food & fuel) remains elevated due to a mysterious pick-up in Health and Education inflation, but the RBI governor referred it to as a one-off phenomenon and downplayed any core inflation concerns. During the press conference, it was also mentioned that there is no immediate worry of fiscal stimulus or slippage affecting inflation. Targeting any particular level of real policy rates has also been officially abandoned. Citi economists believe that these factors point to a possibility of 25-50bps more rate cuts if the CPI follows RBI’s projected trajectory of staying below 4% in 2019. However, any Inflation surprises on either side could alter this rate path.

The 10yr G-sec yield settled @ ~7.32%, down from the previous close of ~7.36%. Citi economists believe that the bond yields will likely be capped, and 10yr G-sec may drift towards ~7.20%. Fixed Income investors, subject to their respective risk appetites, may continue to focus on high credit quality with a preference for short duration and remain diversified in their portfolios.