Growth Slows Down More than Anticipated

Citi Analysts report that their real activity growth trackers have weakened further and hence India’s GDP growth in 4QFY19 is expected to have hit its slowest pace since the period immediately following demonetization. Citi analysts estimate the year-on-year (YoY) GDP growth for the Jan-Mar19 period to have moderated to 6.2%. Consequently, the FY19 GDP growth average is expected to undershoot Central Statistics Office’s (CSO) estimate (7% YoY) by 10-20 basis points (bps).

The protracted slowdown in rural consumption is yet to bottom out. While the weakness is broad based, April 2019 saw tractor sales growth drop to a 42-month low, while two-wheeler sales grew slowest in the last 27-month period. Weakness in real urban wage growth also remains a concern as the urban demand index reached its lowest since Oct’13 as per Citi estimates.

Key indicators like Index of Industrial Production (IIP), capital goods import and commercial vehicle sales have all been on a declining trend over the past 6 months, pointing to a deceleration in investment activity as well. The RBI had also highlighted the need to strengthen growth by spurring private investment during its April policy review. 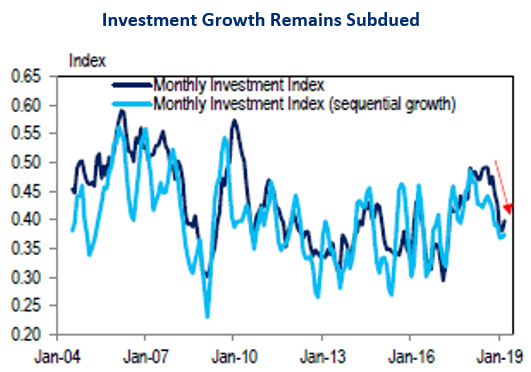 Bank Credit growth in personal loans and services sector (together contributing >50% to GDP) also exhibit a declining trend. However, a pickup in industrial credit growth towards infrastructure, power, telecom and roads provides some optimism.

Citi analysts expect the RBI to continue supporting liquidity with a 25bps rate cut in the June policy review. However, quicker transmission of lower rates to the ailing shadow-banking system remains critical. Citi analysts revised down their FY20 GDP growth forecast to 7.0% YoY (from 7.2% earlier) as the slowdown in 1HFY19 is expected to be more pronounced than earlier anticipated. However, they continue to believe that relatively stronger investment activity will act as a growth cushion against the visible softness in consumption.