The Fifth Bi-Monthly Monetary Policy Statement for FY 2018-2019 was released by the Reserve Bank of India (RBI) today. Following were the highlights.

3. SLR will be cut by 25bps every quarter starting from Jan-Mar till it reaches 18% of NDTL

The decision to pause was predicated on lowering of CPI forecasts – 2HFY19 forecast lowered to 2.7% - 3.2% (3.8% - 4.5% earlier) and 1HFY20 to 3.8% - 4.2% (4.8% for 1QFY20 earlier), with risks to the upside. The MPC (Monetary Policy Committee) acknowledged that actual inflation outcomes for Q2FY19 were below projections, as food inflation has remained unusually benign. However, the Governor did highlight few upside risks to inflation going forward: 1) sudden reversal in some unusually low food prices & impact of higher MSP 2) medium term outlook for crude still unclear, thus making a case to stay flexible.

On Growth, even though Q2 growth was lower than projected in the previous policy, RBI believes that private consumption has remained robust and is likely to be sustained. The capacity utilization levels have improved significantly from 73.8% in Q1 to 76.1% in Q2, which was higher than the long-term average of 74.9%. However, they also note that the both global and domestic financial market volatility, slowing global demand and rising trade tensions may pose some negative risk to exports. On the other side, the decline in crude oil prices is expected to boost India’s growth prospects by improving corporate earnings and raising private consumption. With this backdrop, they retain their GDP growth projection for current year at 7.4%, while H1FY20 at 7.5%. Risks here are broadly balanced.

On liquidity, the RBI expects an increased frequency and quantum of OMO (open market operations) purchases till March’19. It also intends to conduct additional long-term repo operations to meet the transient liquidity demand arising due to advance tax outgo. With respect to banks, RBI proposed to cut SLR by 25 bps every calendar quarter starting Jan’19, until it reaches 18% of NDTL. 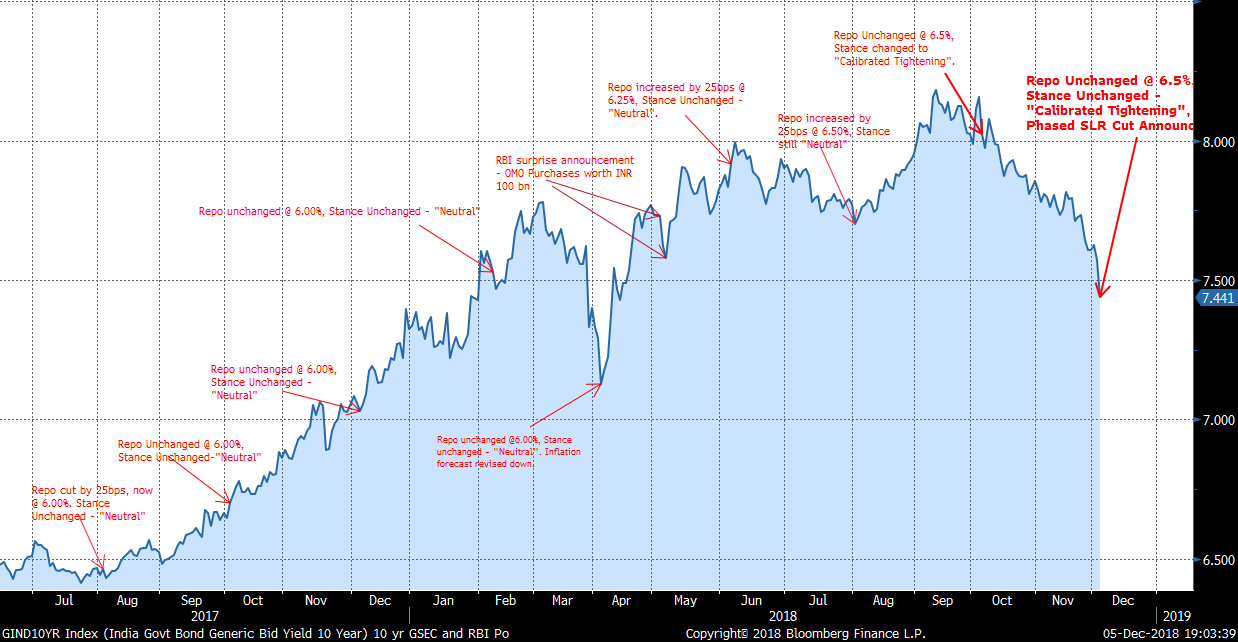 RBI’s lower inflation forecasts for H2’19 and H1’20 signals a long hold on further tightening, until more clarity emerges on the durability of inflation decline. Citi economists are interpreting the ‘calibrated tightening’ stance possibly due to the stickiness of core inflation & possibility of a rebound in food prices owing to lower than usual sowing during winter. Notwithstanding these risks, Citi Economists’ CPI forecast now stands at 3.7% - 4% for FY20 and they expect RBI stance to change in the April policy.

Markets should also take comfort from RBI’s commitment to liquidity management with specific mention about the increased OMOs.

The 10yr G-sec yield corrected sharply and was trading @ ~7.44%, down from ~ 7.55% before the MPC announcement, indicating the markets liking, to the liquidity measures announced. Citi economists believe that the 10 yr may drift below 7.20% in the near term.