The First Bi-Monthly Monetary Policy Statement for FY 2019-2020 was released by the Reserve Bank of India (RBI) today. Following were the highlights.

The Monetary Policy Committee (MPC) announced a 25bps repo cut (with 4:2 in favor of cut) while leaving the policy stance unchanged at “Neutral” (5:1). With a second consecutive rate cut this calendar year, the MPC reversed the rate hikes done under the erstwhile Governor through 2018.

The MPC stressed upon the need to spur domestic growth through private investment. Citing headwinds from global slowdown and weakening domestic investment activity, the RBI revised India’s GDP growth forecast for FY20 to 7.2% (down from 7.4% estimated in February), with 1H FY20 growth forecast slashed by 40bps to 6.8-7.1%. 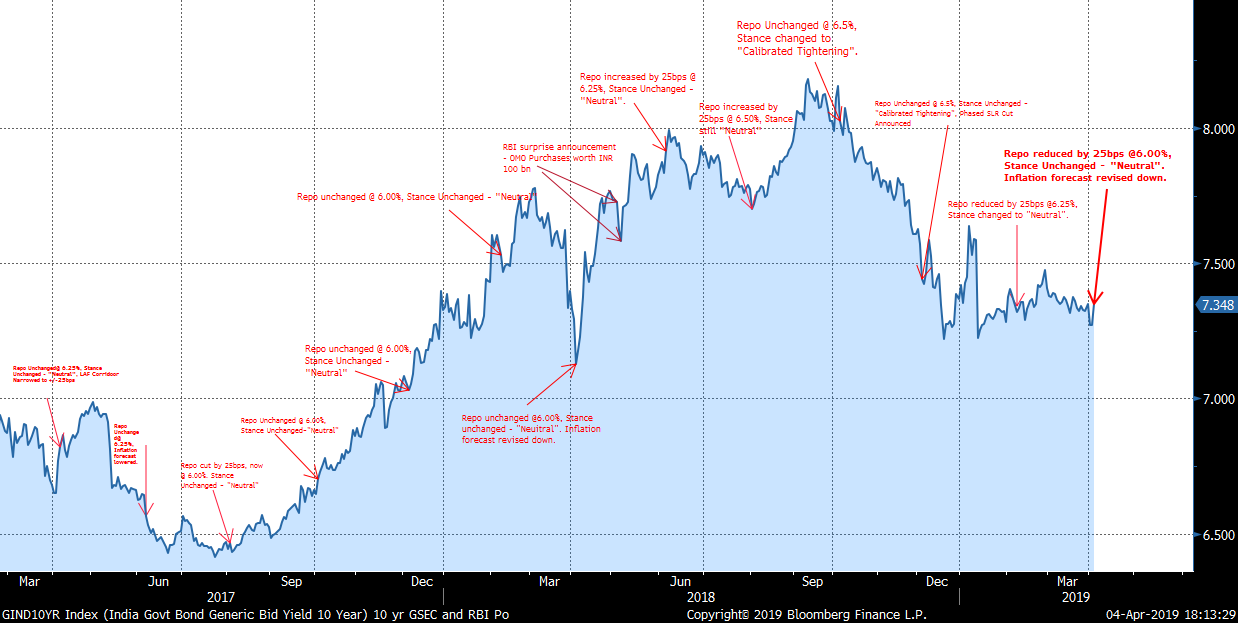 Citi analysts expect CPI to move higher than 4% by 4QFY20, supported by resurgent oil prices and an unfavorable base. Poor monsoon and fiscal slippages could add to the upside risk. Citi analysts see room for another 25bps cut either in June or August policy review.

10yr G-sec bond yields had fallen to 7.27% in the run up to policy day, dropped to 7.22% just before the announcement, but in the absence of further incremental dovishness by the central bank, yields climbed back sharply to close at 7.35%. INR lost more than 1% through the day to close at 69.16 per dollar. Fixed Income investors may continue to focus on high credit quality with a preference for short duration and remain diversified in their portfolios.