The Second Bi-Monthly Monetary Policy Statement for FY 2018-2019 was released by RBI today. Following were the highlights.

This rate hike assumes some significance given that a) it was unanimously voted for by all the 6 MPC members, and b) it comes after a gap of more than 4yrs since the last hike in Jan’ 2014.

RBI believes that the nascent recovery in growth is gaining ground. The recent 4QFY18 GDP growth data released, estimated that India’s GDP grew by 7.7% during Jan-March’18, which was highest since 1QFY17. They also believe that the Output Gap has almost closed. Investment activity, in particular, is recovering well and could receive a further boost from swift resolution of distressed sectors of the economy. However, Geo-political risks, global financial market volatility and the threat of trade protectionism pose headwinds to the domestic recovery. They have thus retained their GDP growth forecast for FY19 at 7.4% (in the range of 7.5-7.6% in H1 and 7.3-7.4% in H2).

Some additional important announcements were: 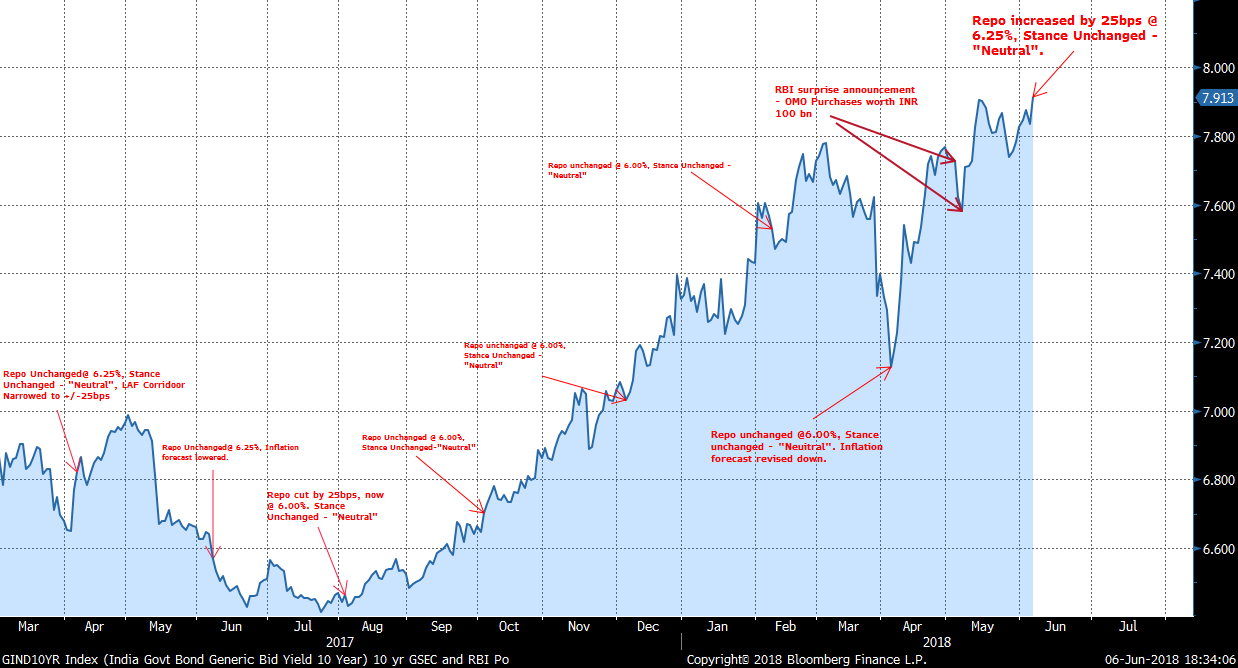 With RBI biting the rate hike bullet earlier than consensus expectations, market participant may start pricing in further rate hikes and also start debating around the timing of future rate hikes. Citi economists expect a cumulative 50bps rate hike in FY19. On the timing question, at this point they believe that October looks more likely than August as RBI might want to space out the hikes and also by then clarity would emerge on the durability of core inflation, MSP impact and possible fiscal slippages along with emerging oil price trend.

Citi economists believe that even though the MPC chose to stick to the “Neutral” stance, which may be interpreted as Dovish by market participants, however in their assessment, MPC statement appears to be a tad Hawkish as the upside risks to CPI inflation surprises have been thoroughly explained, highlighting the compositional shift towards higher core inflation.

The 10 yr G-sec closed @ 7.913%, up 8bps from the previous close of 7.834%, as the market participants digested this out of consensus rate hike. Clients may continue to avoid any fresh long duration exposure and remain diversified in their fixed income portfolios.

Stay updated on global financial market developments and their effects on Indian markets. Gain insights from our wealth management team who will support you through your wealth journey.